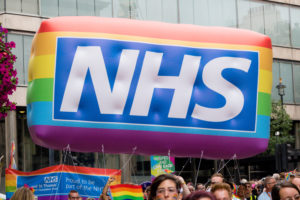 As members of the healthcare industry, we have a select opportunity to improve patient safety for everyone. But as studies and stories have shown, minority groups do suffer in the attempt to receive general healthcare.

Feeling unable to safely access general healthcare services means that prevention, diagnosis, and treatment of health issues takes longer or isn’t dealt with at all – a problem we are all trying to fix within this sector.

LGBTQIA+ health inequalities within the NHS

7% of cisgender lesbian, gay and bisexual people have been outed without consent to staff or patients by healthcare workers. As someone who doesn’t identify as LGBTQIA+, this may not feel like a concern, but it can be disarming for those who may have experienced prejudice due to their sexual orientation in the past.

The positive part in this is that 93% of people haven’t had this happen, meaning that there is an overwhelmingly large amount of NHS staff who are sensitive to the lived experience of LGBTQIA+ people.

We can mitigate issues like this by correctly detailing patient data in a centralised space for all necessary people to access it. Furthermore, by logging incidents to ensure that when a mistake like the above does happen, we can learn from it, so it doesn’t happen again.

Receiving care as an LGBTQIA+ person

The conversation around sex and gender has really developed and become a much more tangible subject than in recent decades. But we must remember that there are elderly LGBTQIA+ in our care and nursing homes who are often unsure of how their sexual orientation or gender identity will be considered, or if it will be considered at all.

It may be that elderly residents will have grown up and lived in a world where LGBTQIA+ lives were not acknowledged, never mind celebrated, or that they have experienced shame and fear regarding their sexuality – homosexuality was only decriminalised in 1967 (1980 for Scotland).

For that generation who will have spent at least some of their lives being seen as illegal, it is with great sensitivity that we should treat them in their later years. However, the LGBT Foundation found that 78% of care home staff had not had any LGBT-specific training in their current workplace.

The good news is that training and education around approaches and treatment of LGBTQIA+ people is available and instilling it within your teams has never been easier with digital advances such as video conferencing, online courses and compliance tracking through Radar Healthcare.

Even within minority groups, people are not as well-represented or considered by the public. This is either through unconscious acts or systemic behaviours.

For instance, groups such as black trans women experience disproportionate inequalities compared to the remainder of the LGBTQ+ population. Cancer Research has highlighted that sex-associated cancers in transgender patients are often missed or found too late due to unclear processes within healthcare settings.

What’s more is that 87% of the nurses who have cared for a trans person felt they were unprepared to deliver care (LGBT Foundation).

Trans people, including trans people of colour, have been here for millennia, and yet are often forgotten about when regarding non-sexual healthcare. To creating processes for marginalised groups should be a key in creating an equal culture of patient safety.

How technology can help

Ensuring LGTBQIA+ people are having the best possible experience when receiving healthcare can start by simply acknowledging someone’s partner as their partner and not a friend or relative.

Clarifying pronouns and preferred names is another way to make people feel comfortable in an unfamiliar setting.

We are lucky to now have digital systems that can be updated quickly and made available for all those who need to know, supporting both patient and healthcare workers in their journey.

Learning from incidents – both negative and positive – strengthens the culture and having a space to be able to log the fantastic moments in a patient or resident’s time within a healthcare space will go towards the improvement of all departments and teams in your organisation.

As we make our way through Pride Month, it is important to mark the progress that has been made and look forward to creating a better tomorrow for LGBTQIA+ people, and with that a better healthcare experience for everyone.