Healthcare systems differ all over the world, with some providing high-quality services for free, and others causing people to quickly rack up thousands in medical bills. So, does paying for healthcare mean that you are guaranteed a better service, or are free healthcare systems just as reliable?

Here at Radar Healthcare, we are committed to supporting healthcare providers with bespoke access to our pioneering software that’s designed to save valuable time by automating arduous administrative tasks, as well as quality and compliance processes. Our ultimate goal is focused on giving those working in the health industry time back to improve both patient safety and overall healthcare systems, and we are also passionate about creating a culture of learning and improvement, rather than blame.

With this in mind, we have taken a seed list of the 33 developed countries, and using the available information in each nation, have considered factors such as quality of healthcare, annual yearly salaries, number of hospitals, and the total number of healthcare costs per year.

These statistics have allowed us to determine our own ranking of the countries offering the best healthcare systems around the globe, allowing us to highlight how some simple improvements can really make a difference  – and our results may just surprise you.

Ranked: The Best Healthcare Systems Around the World 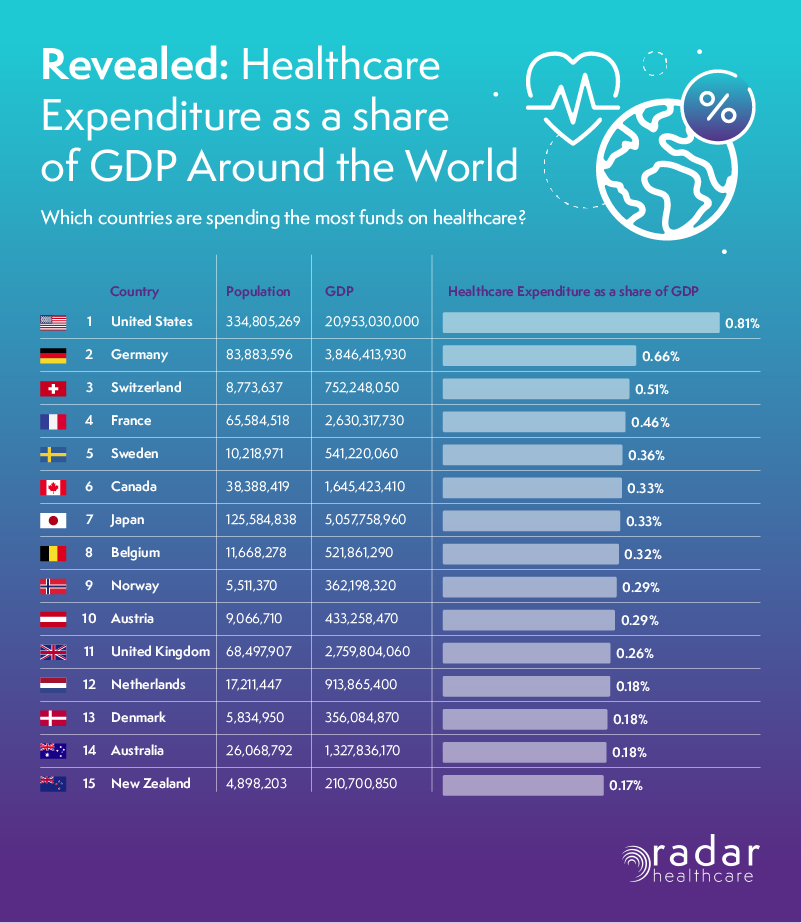 Overall, the standout country emerged as Japan when it came to exemplary healthcare services. In total, Japan achieved a very impressive score of 78.5/100, which was helped by a ranking of 9.5/10 when it came to the quality of healthcare provided to residents.

Despite a large population of 125,584,838 people, Japan still managed to maintain a fairly low yearly compulsory healthcare cost per person, with an average total of £3,725 – ranking 6/10.

In second place came Germany, with a very respectable score of 73.5/100. Hailed as the second-most progressive country in the world, this is not surprising. The nation’s exemplary ranking was obtained thanks to a 9/10 human development score, which refers to how many people live long and healthy lives, have a decent standard of living and achieve a wealth of knowledge.

A fairly low score when it came to average voluntary healthcare costs per person (£796 per year) meant Germany walked away with 9/10 in this category too, proving them to be a very worthy second place holder.

In third place was Australia, scoring a commendable 71.5/100 overall. Despite the country being gigantic, their population is less than that of Japan and Germany at 26,068,792, making it slightly less impressive that their human development score was 8.5/10.

They ranked 8/10 for their overall quality of healthcare, along with a reputable 7/10 when it came to their average salary vs cost of healthcare statistics, with 3.15% of the average £38,889.91 salary going towards healthcare per year.

Despite a large population of almost 69 million residents, the UK managed to achieve a respectable 7th place in the overall report, with a score of 69.5/100 – the same as Switzerland. Considering how densely populated the UK is as a nation compared with Switzerland, alongside the well reported strains and pressures the NHS is under during the past few years, this score for the UK is commendable, if still highlighting the room for improvement in terms of healthcare quality.

Revealing the Best Countries Around the Globe for Quality of Care 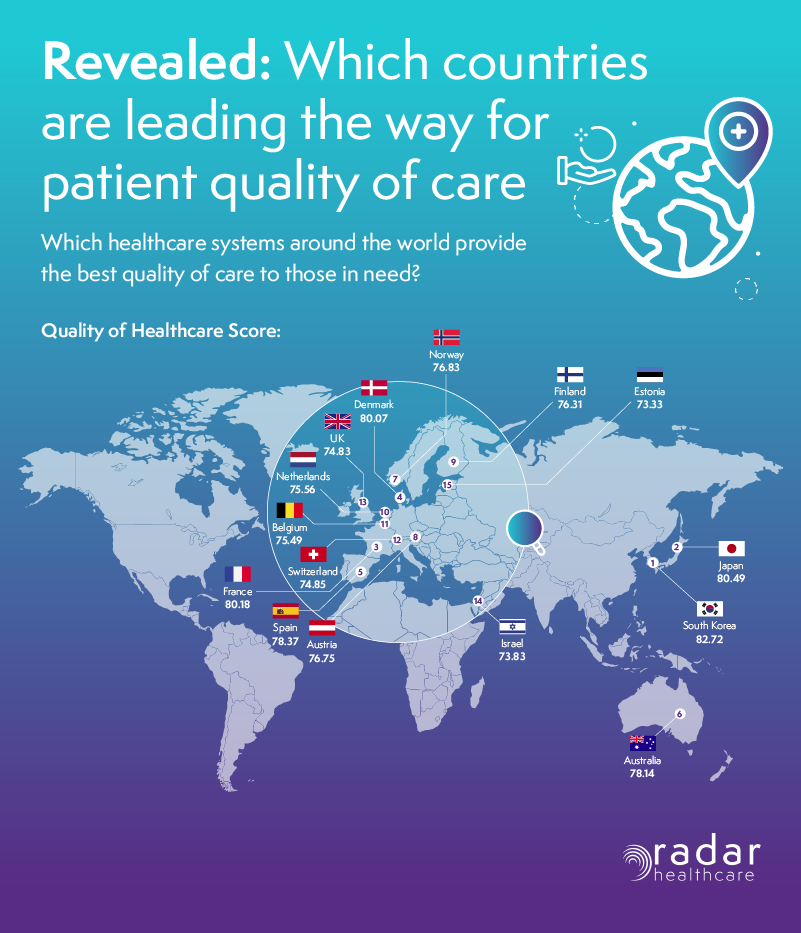 When it came to the quality of healthcare services, the results were a little different. These scores take into account factors such as equipment, staff numbers, and the number of complaints. In first place this time was South Korea, scoring a Quality of Care ranking of 82.72. This allowed them to achieve full marks in the overall quality rankings, with an impressive 10/10.

Despite a slightly lower human development score of 5/10, South Korea managed to pull things back with 4,133 hospitals for the population of 51,329,899 – once again scoring 10/10 in the hospital vs population section.

In second place was Japan, which achieved 80.49/100 for quality of healthcare. A staggering 8,300 hospitals led to a perfect 10/10 hospital score, as well as 9.5/10 when it came to the number of hospitals compared to the number of people in the country.

An innovation ranking score of 82.86 which includes elements such as problem-solving and creating new technology to make life easier for people, allowed them to obtain a decent 7/10 in that category scoring.

Finally, in third place was France, with a very worthy score of 80.18 for the quality of care the country provides for residents.

Despite this, France still scored 8/10 when it came to healthcare costs vs yearly salaries, along with having a very sensible 3,008 hospitals – scoring them 8/10 on that front.

The UK placed 13th with regards to quality of care, with a score of 6.5/10 (74.83) and despite high population density and – of course – the huge impact the events of the last two years has had on the NHS, still beat out the likes of Germany, New Zealand and the USA.

Healthcare Costs: Revealing the most and least cost-effective countries for healthcare 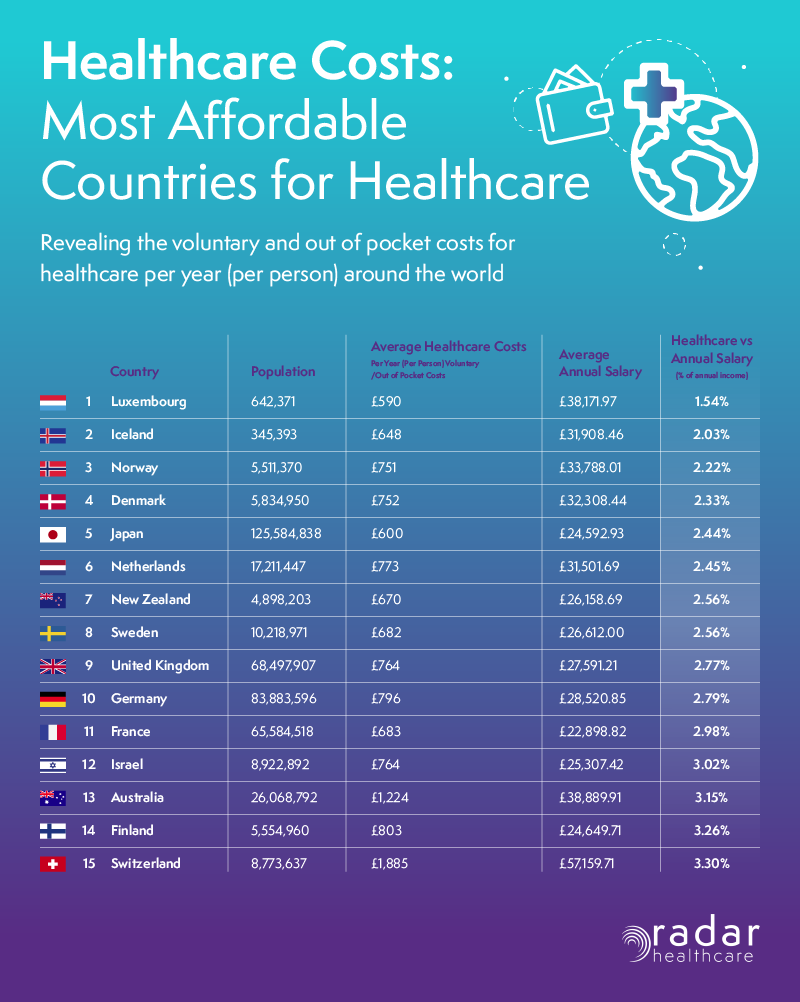 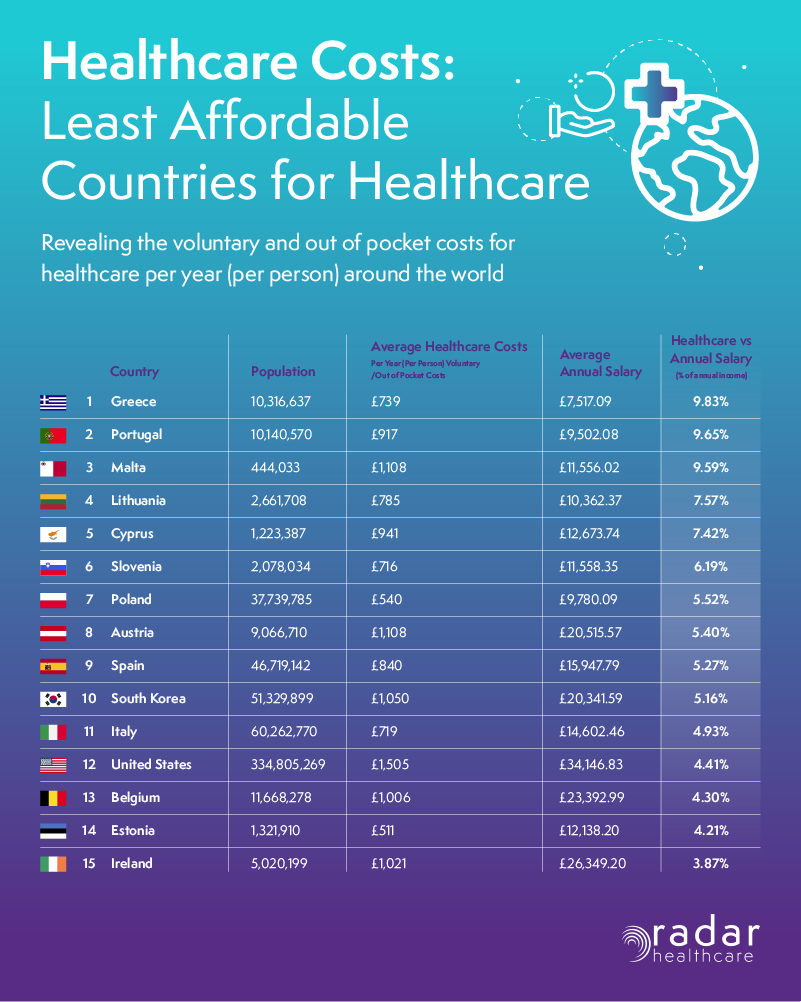 First on our list of contenders was Luxembourg, which came equipped with a population of 642,371 and an average annual salary of £38,171.97. This led to impressive healthcare vs annual salary comparison of 1.54%, highlighting the cost-effectiveness of these services. Furthermore, the average voluntary healthcare cost per person per year was a respectable £590, highlighting very realistic prices in this location.

Second on the list is Iceland, which has a population of 345,393 and an annual average salary of £31,908.46. Despite their salaries being generally lower, Iceland still maintained overall healthcare vs salary comparison ranking of 2.03%, which was due to voluntary healthcare spending coming to £648. Like the UK, Iceland has a universal healthcare service that has not been privatised, unlike Luxembourg, which requires a percentage of people’s salaries to maintain its medical management.

On the other end of the spectrum was Greece, which has a population of 10,316,637 and an average annual income of only £7,517.09. This leaves the average healthcare vs salary comparison of the nation at a very disappointing 9.83%, highlighting very little value for money at all, and a substantial amount of income potentially being spent on medical bills. Greece’s financial crisis between 2007-2008 was widely documented, and the country has, thus far, struggled to get back on its feet. Therefore, humanitarian crises must be considered when taking these facts into consideration.

Portugal, with a similarly-sized population of 10,140,570, also had a very low annual salary of £9,502.08, along with voluntary average healthcare costs of £917 per year. This left them with a ranking of 9.65% when comparing their salaries to their healthcare costs, revealing that their services would work out to be very expensive.

Despite having their own financial crisis between 2010-2014, Portugal is more financially stable in recent years – but still has a long way to go in terms of the cost of living throughout the location.

The UK places 9th when it comes to cost-effectiveness of healthcare, and despite boasting the 5th largest economy in the world this is still a respectable ranking considering certain factors. The densely populated nation of almost 69 million individuals,  alongside an average annual income of just £27,591.21 leaves the people of the UK spending 2.77% a year (£764) of their earnings on voluntary or out of pocket healthcare. 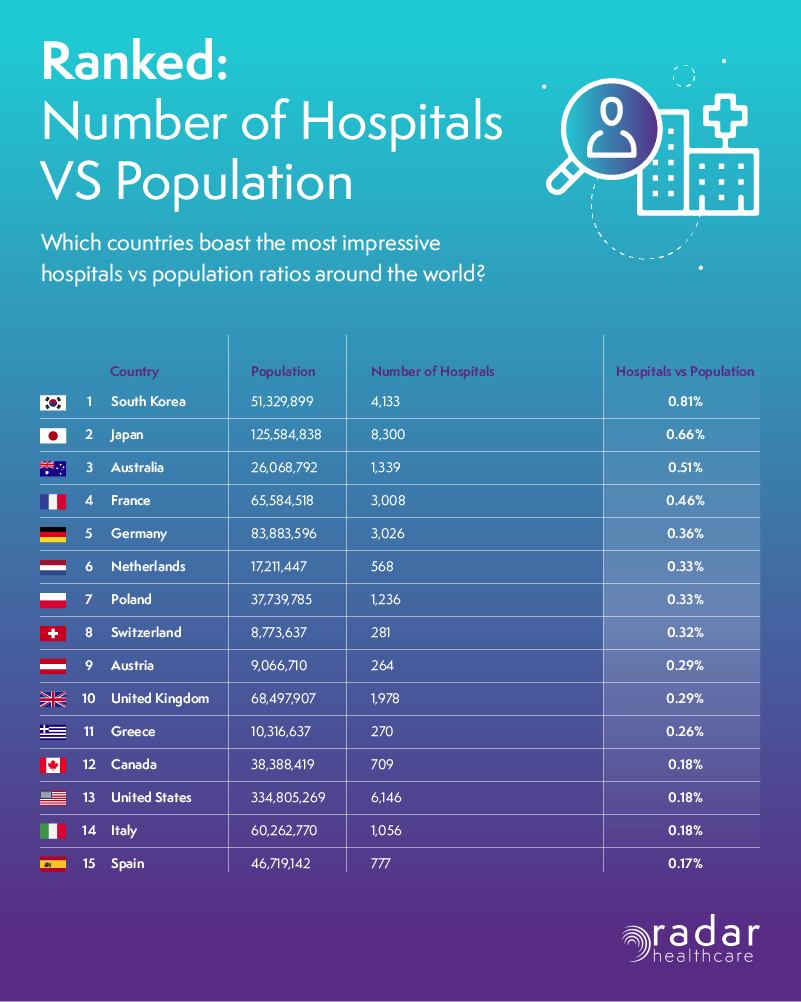 Another element that hugely impacts healthcare processes is the number of hospitals being able to cater to the number of people in the country – as if there are far more people than hospitals, it will inevitably lead to people having to pay extortionate amounts for private care.

The country that had the best number of hospitals compared to its population was South Korea, which has 4,133 hospitals compared to 51,329,899 people. This left them with an overall percentage of 0.81%, highlighting that there are more than enough locations to treat sick people if needed.

Japan, with its colossal population of 125,584,838 and 8,300 hospitals scored 0.66%. This is unsurprising, considering that Japanese citizens have a longer life expectancy compared to anybody else in the world, as their healthcare system is famous for focusing on preventative measures, rather than reactive ones.

Third in the list was Australia, with an overall score of 0.51% when it came to their population vs their number of hospitals. A population of 26,068,792 is catered for by a reputable 1,339 hospital locations, allowing the country to boast some of the best-quality healthcare processes in the world.

The country focuses on a mix of private and public healthcare, which is a practice that is becoming more common across the globe – but it also relies on Medicare, which is a universal healthcare insurance scheme, paid for by the government and taxpayers.

In 9th place, is the UK, with an overall percentage ranking of 0.29% for this category. A population of 68,497,907, with only 1,978 individual hospitals, suggests a significant imbalance between available healthcare and the sick people across the nation who need access to it.  Also in 9th place was Switzerland, which has an entirely private healthcare system.

Finally, we have Singapore and Denmark, which come in as the lowest-scoring countries for the number of hospitals vs population numbers, with 0.05% overall each. Both countries have very similar population sizes, as Singapore has 5,943,546 with 27 hospitals, and Denmark has 5,834,950 and only 32. This could be due to the fact that Singapore has one of the lowest spending records in the world when it comes to healthcare investments (SGD 9.8 million out of SGD 400 billion), which would hugely limit resources and tech equipment.

When it comes to Denmark, it was revealed in 2019 that the Danish Ministry of Finance wanted to focus on healthcare workers in patients’ homes rather than hospitals and that they were working on reducing the number of them to improve quality rather than quantity. While we can understand the logic behind this notion, this idea was guaranteed to lead to an imbalance between hospitals and the population.

What can the UK do to improve their healthcare system further in order to compete with other countries around the world?

Chloe Weatherhead, Head of Customer Experience at Radar Healthcare says: “Overall, there are numerous factors that have an impact on the efficiency of healthcare systems across the globe, such as financial and humanitarian crises, high population density, low salaries, and so on.

“The huge steps that have been made, with regards to healthcare related technology innovation within the last few years alone, is already having a hugely positive impact on quality and safety, and improving outcomes and overall experiences for all kinds of patients.

“Learning and taking inspiration from impressive international healthcare systems, such as those found in Japan, could certainly be a wise move for those wary of embracing ever-evolving technological advancements. Ultimately, the best way to tackle the ongoing challenges healthcare systems around the globe continue to face is to drive improvements by learning from one another.

“When it comes to the UK in particular, it’s reasonable to note that it could be beneficial to focus on upgrading different technological processes, such as making it possible to manage compliance systems and quality checks all in one place.

“It’s also worth noting how access to national health-related data can have a hugely significant learning impact. For example, the new LFPSE (Learn from patient safety events) service – which are currently in the final stages of development – will act to give healthcare workers a more holistic and wider view of national data, in order to see what’s working well and what’s not up and down the UK.

“At Radar Healthcare, we pride ourselves on our ability to condense the workloads of those in medical professions, allowing them to work smarter – not harder. It is also of the utmost importance to us that those using our services are in the mindset of wanting to take the opportunity to learn and grown, rather than live in fear of blame of repercussions, as this is completely detrimental to improvement in the healthcare industry.”