Women’s Health: How do the health systems compare for women around the world?

Very often, women will end up receiving sub-par healthcare in comparison to their male counterparts, for a variety of different reasons.

In the 18th and 19th century, it was very common for women to be diagnosed with ‘hysteria’, brushing off any real diagnosis and leaving them to suffer through their genuine medical conditions. Despite the general quality of global healthcare improving significantly since, there are arguably more important measures to be taken in certain territories when it comes to female-focused treatments and care.

Interestingly, a 2022 report published by Public Policy Projects (A Woman’s Health Agenda: Redressing the Balance) highlights the importance of embracing a culture of change in the design and delivery of women’s health to achieve national systems and local services fit to meet the expectations and needs of the 21st century woman.

In a recent episode of our ‘What The Health Tech?’ podcast, which acts as a platform for health and social care professionals to engage in discussions on creating change, tackling challenges and making an impact on people’s lives, we spoke to Lottie Moore, who wrote the aforementioned report on A Women’s Health Agenda. During the episode, Lottie discusses her views on the health issues women and girls are facing in the modern world, as well as how policymakers are looking to help address the imbalance in the inequalities related to healthcare for those assigned female at birth.

After analysing the dataset, we’re able to reveal the healthcare systems around the world that are statistically the most helpful for women. This analysis took into account aspects such as access to abortions, IVF treatment options, birth control access, and medical tests and screenings aimed exclusively at biological females. 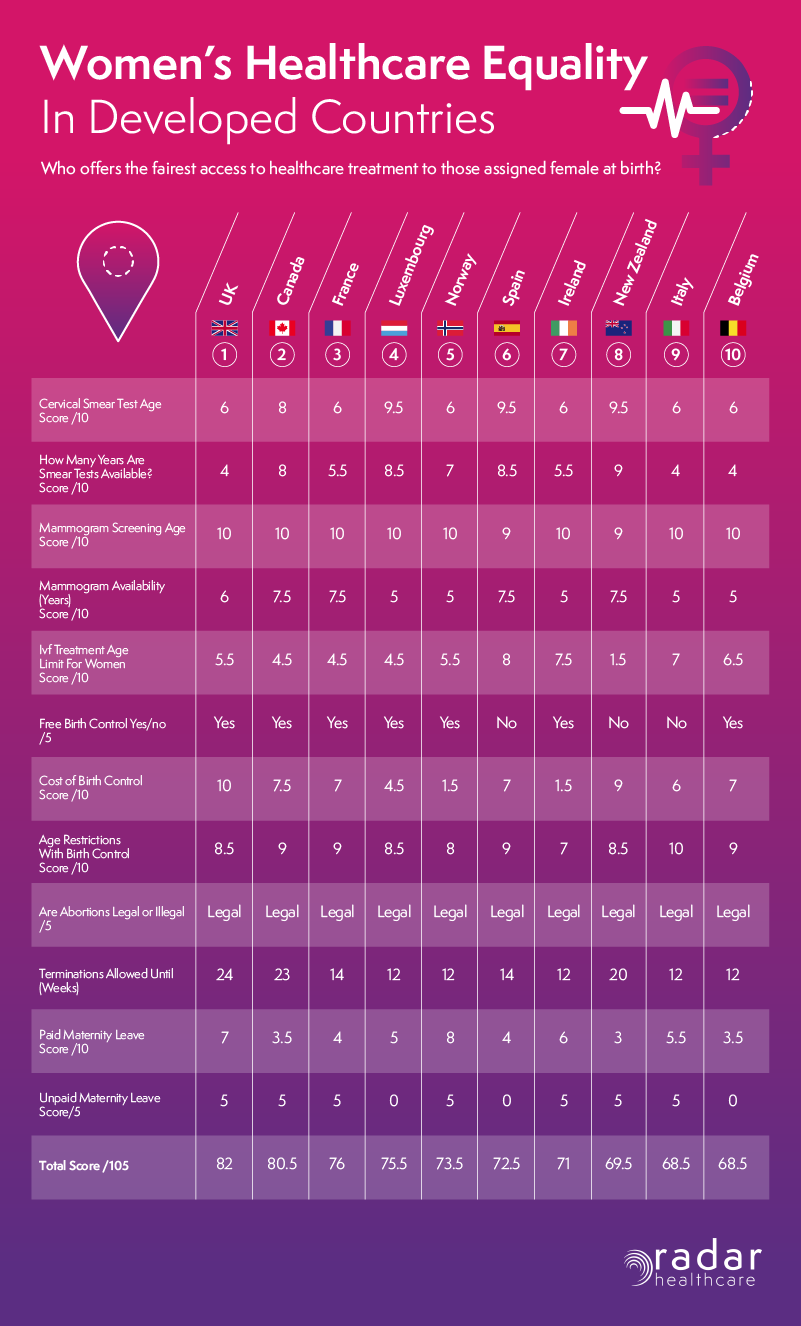 The country leading the way in female healthcare is the UK, with a score of 82/105 (instead of 165, as this data focuses specifically on ranking women-specific factors.)

Having discussed smear tests and mammograms above, we now turn our attention to how developed countries compare to one another when it comes to offering IVF treatment to those struggling to conceive naturally. For women in the UK, the maximum age one can start an IVF cycle is 45, scoring 5.5/10.

During Lottie Moore’s appearance on ‘What the Health Tech?’, IVF and the subject of how it’s perceived in different territories around the globe is discussed. One statistic highlighted by Lottie during the episode reveals that during 2021, more money was generated from IVF than through cosmetic surgery procedures, emphasising the commercial impact on such a raw and emotional subject for prospective parents in their journey towards having children.

Second on the list was Canada, with an overall score of 80.5/105. The IVF age limit for women in the country is just 43, the same as the limit in France. Both of these territories therefore received scores of 4.5/10. 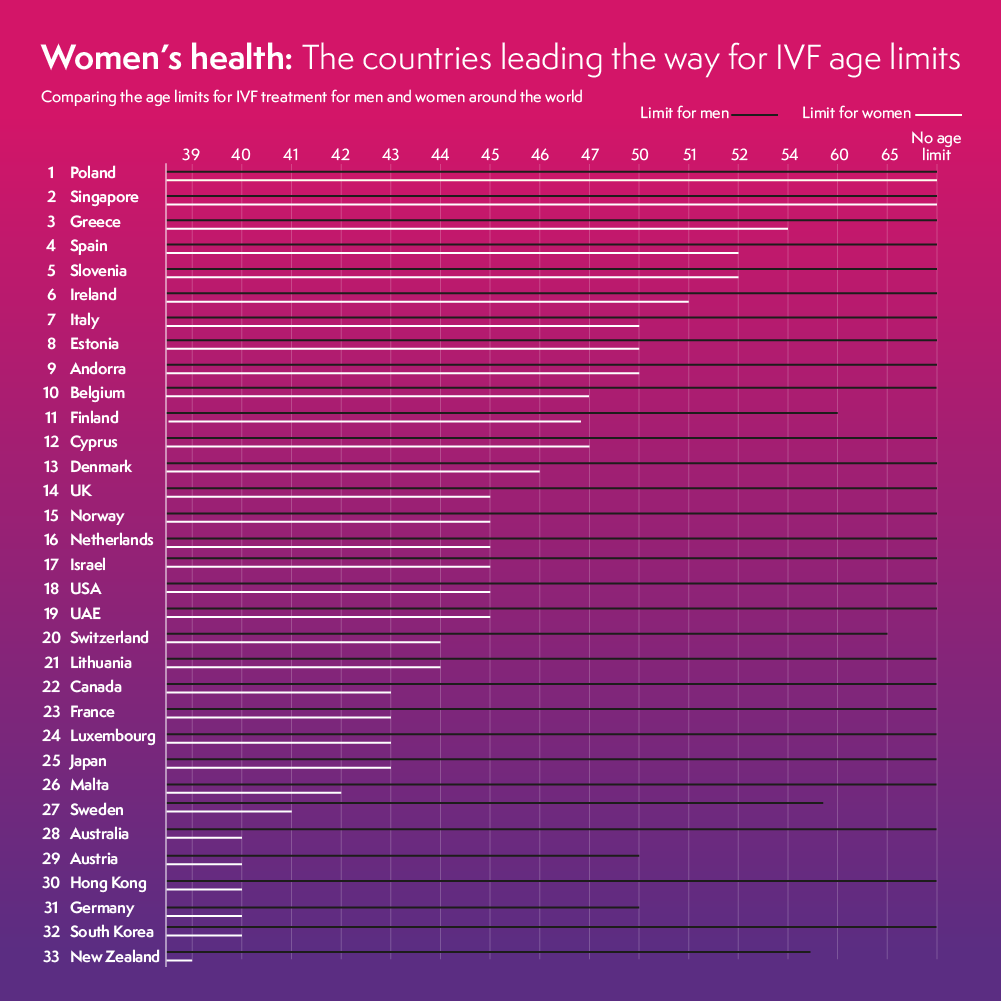 A recent article revealed that ‘fertility falls by half’ when a woman reaches the age of 40, possibly explaining why Canada and France stop offering treatment at 43. However, in all three top countries, the age requirement for men to receive IVF treatment is limitless. This seems to shine a light on major gender inequality regarding the path to parenthood, as male fertility also begins to decline around the age of 40 – as although a man can theoretically produce sperm until the day he dies, its viability declines with age.

Despite fertility in women declining at 40, offering IVF to older females would offer more of a realistic chance of conceiving, while also lessening pressure on younger people to undergo treatment out of fear that they will miss out at a later stage.

Once again, the UK leads the way regarding access to birth control for its residents, with a score of 5/5. This is possibly due to there being no age limit for those requiring free birth control, whereas Canada states that you must be under 25, and France only offers it to those aged 16-25. Due to this, both of these countries scored 2.5/5.

Despite being in the top three overall for women’s health equality, Canada and France fall short when it comes to paid maternity leave. Canada offers new mothers just 15 weeks of paid leave, while France offers 16. Despite Denmark scoring only 68/105 in the section overall, the nation does require an honourable mention for offering a whole 52 weeks of paid maternity leave to employed mothers, while its Scandinavian neighbour Norway offers 49 paid weeks of leave.