Many territories conclude that gender identity isn’t something one can be certain of until they reach a certain age. With this in mind, our Health Inequalities Report reveals the countries offering the most equal opportunities for transgender hormone therapy.

A recent study revealed that as many as 0.005–0.014% of biological males and 0.002–0.003% of biological females across the globe felt some form of gender dysphoria. This refers to feeling uncomfortable with the physical attributes of the sex you were assigned at birth, and the subsequent gender that society identifes you as.

The severity of gender dysphoria could potentially increase as a child gets older, as their body continues to veer in a direction that they do not feel is right e.g., when one begins to develop breasts, start their periods, or grow facial hair. Due to this, it is important that children, after undergoing the necessary psychiatric tests and screenings, are allowed to follow the path towards who they truly are – accompanied by the appropriate hormone treatments. 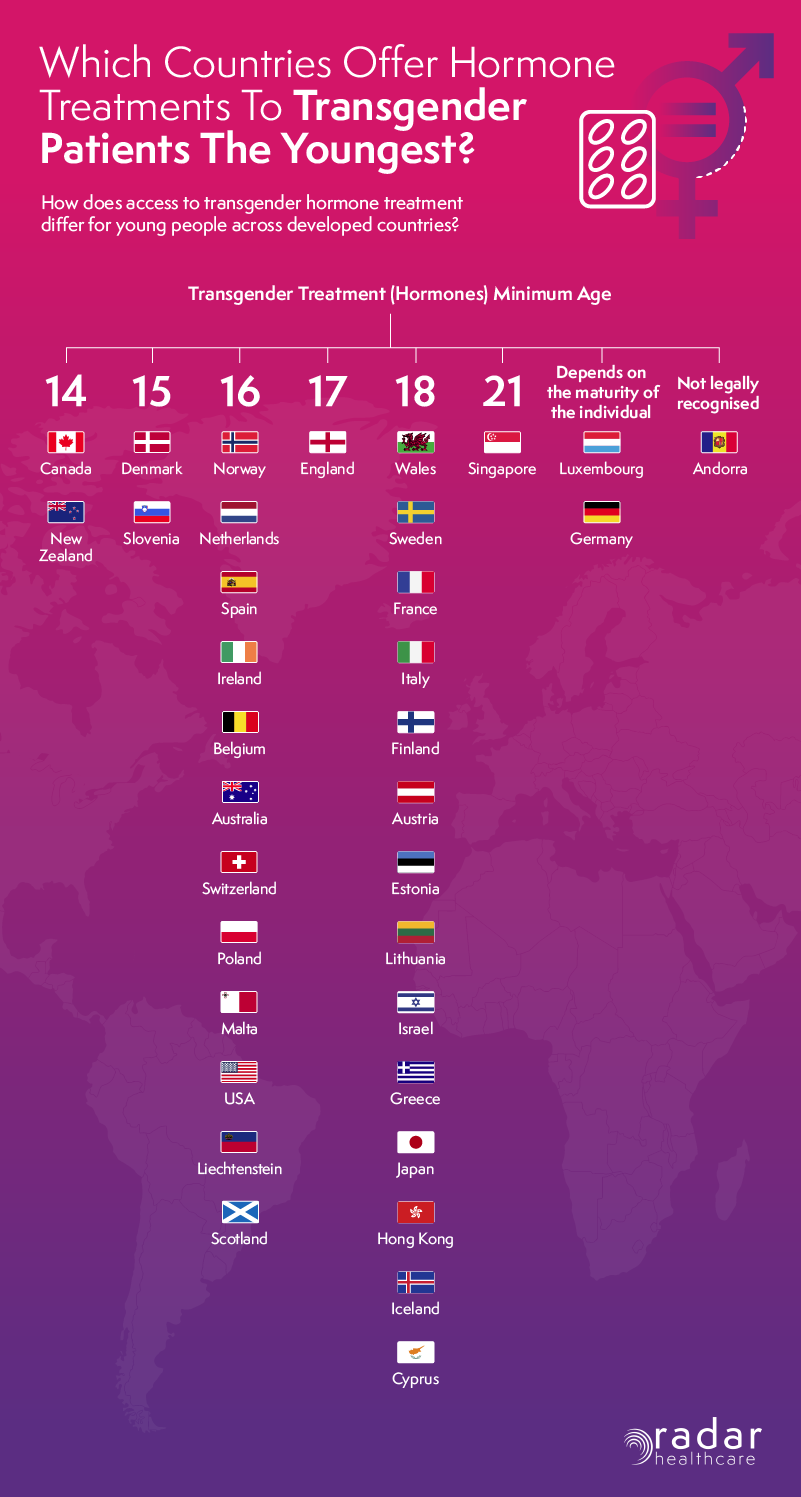 Countries leading the way in this section were Canada and New Zealand, who both allow young residents to undergo hormone therapy from the age of 14.

Slovenia and Denmark emerged in joint second place for this section, offering hormone treatment to transgender individuals from the age of 15. Norway, Netherlands, Spain, Ireland, Belgium, Australia, Switzerland, Poland, Malta, United States, and Liechtenstein are in third place with hormone treatment allowed from 16. In the UK, the required age varies according to nation,  with treatment allowed to start from 16 in Scotland, 17 in England, 18 in Wales, and 15 in Northern Ireland.

As many individuals will start the process of puberty around the age of 11 or 12, refusing transgender youth the chance to proceed with hormone therapy until they are in their late teens could cause a huge amount of distress to those feeling trapped within their own developing bodies.

An American study indicated that almost 80% of trans individuals surveyed had considered suicide, with the report also highlighting that suicidal thoughts were most prevalent among transgender youths. This, once again, reinforces the justification of allowing hormone treatment to begin at a younger age.

In Luxembourg and Germany, the age one can begin hormone treatment depends on the maturity of the individual. In Germany, this means that if the individual has undertaken the correct amount of therapy and has an ‘indication letter’, they can undergo HRT (hormone replacement therapy) under public health insurance.

This requirement offers younger people the chance to start living their new life as soon as possible, revealing Germany to be far more passionate about equality in some aspects, rather than others, such as abortion laws.